﻿Why A Food Tour Is Needed When In Bologna

Bologna is an attracting place to me: it is a city pained with the characteristic terracotta red, where you find the skyscraper tall medieval towers and the portico along the street that exist nowhere else; there are tons of shops, which make you wish to have more money and more time to spend; and the food there, MAMMA MIA, so good!!!

The very first time I visited Bologna was a cloudy Saturday. We arrived in five to spend family time while exploring the city. Besides the great time spent together, our son got his great gift in Piazza Maggiore: a balloon doll; while for rest of us, the greatest experience was a big lunch at Oltre! I read about this restaurant in a post from Curious Appetite, and booked a table in advance. Oh gosh, that was a mind-blowing meal.

Ever since then, I’ve always wanted to return to Bologna, just for the food! And last month in February, my dream came true! I was invited to Curious Appetite’s La Grassa Bologna food tour for a culinary adventure.

It was not the first food tour I joined in Italy. However after several culinary walks, I am more convinced that to find the authentic food in an unknown city, you do need the help from someone local and professional.

Bologna as a major city of region Emilia-Romagna, where gives birth to most of the world-famous Italian food: Parma ham, balsamic vinegar, parmigiano cheese, etc, has countless diners & restaurants, which can easily make you feel lost. To pay a meal in a “popular” restaurant in a tourist city feels like gambling. It is hard to know for sure if the food served is authentic or not. But a food tour can, at least, save you from the touristic traps.

Rather than giving you a general list of famous Italian dishes: pizza margherita, lasagna, spaghetti, etc. (each has its own origin), a guided food tour only brings you to taste the local origin!

We were brought to a salumeria, where only locals know and visit, for cured meat tasting. Look at our meat and cheese platter! That facial-mask sized mortadella wrapping on finger bread won my heart!

When in Bologna, a typical food not to be missed is the tortellini! It is the Italian version of “dumpling”, and it is from Bologna. One of the fun part during the tour was to go to the kitchen of a tortellini workshop, see how they are made step-by-step, and DIY our own.

The past dough needs to be rolled into a very thin flat shape, before cut into small square wraps of the tortellini. Then put the stuffing on top of each wraps, and make them into the Italian dumplings. 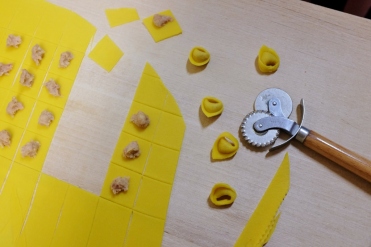 I like tortellini, or any food in the dumpling form, because it is such a social food. To make them, it calls the whole family members to come together to the table, and spend a good time team-working on it. And when serving, you actually cook in one single pot for everybody, and sharing with each other. One-bite size food contains so much flavors and represents lots of memories and emotions. To me, that’s the beauty of cooking!

It is weekend! What are you preparing for the family dinner 🍴

Besides gourmet tasting, the La Grassa food tour also introduce city histories during the walk. If you are like me, who are not a huge fun of a serious visit to museum, a food tour is a good compromise.

You may as well know that Bologna has the first public university in the world. So “study” is written in the city’s law (kidding). It is hard to avoid!

One of our stops was the original location of Bologna university. Those more than 5,000 coat of arms pained on the wall, each represented the families of the most important students attended the university, would “WHOA” you once stepping into the courtyard. The university was founded in 1088, and it was the FIRST PUBLIC UNIVERSITY in the world, which means it opened to everybody: man and women; noble and average; and people from different religions, as long as they can afford to pay your fee to the professor.

And of course the famous over 300 feet tall torre dell’asinello deserves, if not a climb, at least a serious gaze from distance.

Why it is worth taking a day trip to Bologna? The answer is easy: the food! I was there this morning to taste the best flavor in town. Thanks to @curiousappetite for taking me to adventure this city in such a fun way. More snaps can be found in my Instagram stories #lagrassatour