For those of you, who are Chianti wine lovers or just simply interested in Tuscany wine, do you know who was the one set the Chianti wine formula? Or you were like me, just assumed that it was an united agreement by all the Chianti wine makers long long time ago to use at least 80% Sangiovese grapes to make their wine qualified as Chianti?

After moving to Italy, I proudly turned from a wine illiterate to an amateur. After joining some interesting wine tours around Tuscany, I’ve been able to get some basic wine knowledge and learned that as a wine maker, in order to have the Chianti labeled on your bottles, you must follow a serious of rules in wine making. And one of the most important laws among them is using minimum 80% Sangiovese grapes in blending.

I didn’t care enough to wonder who was the very first person that decide the formula of the Chianti wine making, until my friend Niccolo, whose family runs the vineyard and resort in Chianti Fattoria Valacchi, told me that he went to visit Barone Ricasoli, the castle of the Ricasoli family who set the Chianti rule!

What kind of person was that, who was authoritative enough, to set this golden rule that even today is still affecting one of the most famous wine in the world? My curiosity brought me to a tour of Castello Di Brolio, the castle of the Ricasoli family.

The tour started from the castle’s gate, lead us to visit the family chapel, the museum, and the backyard of the castle with a overview to the garden. 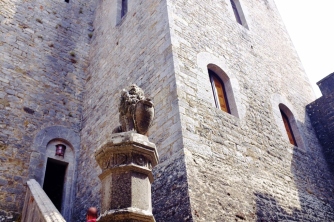 Tower of the Castle. The bottom part dates back to 1141.

Downstairs of the chapel, it still reserves the traditions of the family since centuries.

In the museum of Ricasoli, we were brought to admire a huge private collections of weapons by the Ricasolis, as well as the precious room with hand-painted wall, then learn the contribution of Bettino Ricasoli in the process of the republication of Italy, as well as his researching tools for concluding the best formula of Chianti wine. Bettino Ricasoli was not only one of the most important persons in the Chianti wine history, who eventually decided its formula, he was also the first Prime Minister of Italy, the Co-Founder of the famous newspaper La Nazione, and the one who introduced the railway into the Chianti area.

The last part of the tour was of course the cellar visiting and wine tasting. Although it is now already the 32nd generation of the Ricasoli that is running the family business, and the wine production has been modernized using new-technology machines, it is still appreciating the natural characters of the ingredients. Such as study the different kinds of soils in the fields, keep the farms organic, let the grape juice flows into the barrels rather than pumping it, etc.

Last but the most important part, as it was already 1pm in the afternoon after the tasting, we went to the restaurant of the castello for lunch. A €38 full lunch includes an appetizer, home-made pasta, beef steak as main course, and a chocolate cake for dessert, plus of course a glass of wine!

It is highly recommended to book the guided tour in advance of your visit, as there are only limited space for each tour and usually they are all fully booked. We took the Classic Tour with €25 per person, which is the most comprehensive tours they have. Similarly you can also reserve a table in the Ricasoli’s restaurant for lunch, where the food tastes absolutely as gorgeous as their wine!